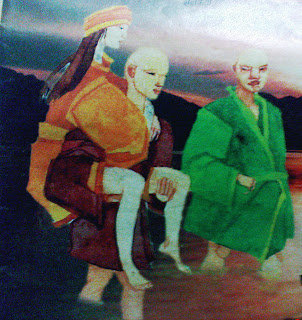 There was once a Zen monk, sworn to celibacy,
walking with another monk along a mountain trail.
They came to a stream and saw a beautiful woman hesitating to cross.
The Zen monk picked her up, walked across the stream
and put her down on the other side.
The other monk was scandalized!
"You have touched a woman! You have defiled the name of your religion!"
He kept screaming at him in accusatory rage as he followed him along the path.
The first monk walked along in silence,
and after some time he turned around and faced the angry young man.

The first monk replied "I put her down when I reached the other side of the river.
You, on the other hand, have been carrying her this whole way."
So, got the lesson from this? :Zen And the Art of Happiness

Posted by beyondrakesh at 9:59 AM

"The source of all problems is the mind.
Thoughts arise, you identify with your thoughts
and that defines your experience.
So many thoughts arise without you even knowing it.
So many worries and troubles constantly arising
and repeating and although you are not
conscious of them, you are identified with them.
You are identified with the
stress of it, the conflict of it
and so that is your experience.
Say you have to get your toilet fixed.
You know you have to get your toilet fixed.
But the thought repeats itself as a conflict
until you resolve it.
It sits on your shoulders like a hundred pound weight
telling you life is not the way it is supposed to be
until the toilet is fixed and then it goes away.
And then the plumber says
"I can't come until next Wednesday"
and that hurts because you know
you will have to carry around that
thought, that conflict of
"I have to get the toilet fixed" for another week.
And there are thousands of them
arising so fast!
Toilet fixed, dentist appointment
late on rent, your sweetheart dumped you.
You wake up in the morning
from a state of deep peace
and freedom from all identity
and boom....
the mind looks for something to identify with
and there's the broken toilet, the rent bill
the high school sweetheart
and a thousand others within seconds.
And that's who you think you are,
that is how you perceive life.
To stop allowing thoughts
to dictate your experience
and instead discover what
is truly here beyond the thinking.
To realize your natural state.
Because your natural state
is love, is peace, is bliss.
Not some emotional experience
on the surface
but every cell of existence
vibrating as bliss.
And if you can taste that once,
then you can do it twice.
Then you can rest in your natural
state for longer periods of time
before being pulled back into thinking.
And eventually, the duality
between thoughts and peace
ceases to exist.
You begin to experience
thoughts as energy.
You experience the very nature
of thought itself.
Which is unconditional bliss.
It's like you stop being involved
with the lyrics to the song
and just enjoy the music.
The bliss of the music.
The toilet still needs to be fixed
but you're no longer wearing
it as a hat.
It no longer defines you.
You exist
completely free of it
as unconditional peace.
ODYSSEY OF ENIGMA
http://beyondrakesh.blogspot.com
Beyond the invisible (infinity)
"Knowing others is wisdom, knowing yourself is enlightenment."
Posted by beyondrakesh at 4:17 PM