First of all, I welcome all visitors of my blog. Since I'm involved in Computer Hardware, Network and Data Recovery field. I would like to share own of my greatest expertise from my field. This time I would like to share one of the greatest Antivirus that very few have known. I have known this Antivirus since its beta release but I couldn't use it since the beta version was not made available except few countries excluding my home country. But since it officially released on 29th September 2009 I've been using it with great success. This antivirus is released by Microsoft itself and called as "Microsoft Security Essentials". It has been made available for following Operating Systems for free but the windows must be licensed and genuine, in order for MSE (Microsoft Security Essentials) to run. 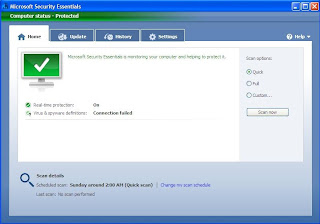 
Now, since personal computer and laptops is dominated by Microsoft's Operating System, I guess most of my visitors are already using one of the aforementioned Windows version. I've come across various antivirus applications but for me MSE stands on the first. There is a misconception that free will not be good as commercial, but in this case this proves wrong since it itself is developed by Microsoft and this antivirus is free for Small Home and Office (SOHO) use but for the enterprise and large organizations they have another antivirus named "Microsoft Forefront Client Security". So, MSE is completely free and worth a try antivirus for Small home and office environment but make sure your copy of Windows is genuine.
The strongest points that I have seen in Microsoft Security Essentials:
-- It is light on system resources i.e. It does not consume your valuable memory and CPU and runs faster without slowing down your computer.
-- For Windows XP it requires at least 500Mhz CPU and 256 MB RAM and 140MB free disk space.
-- For Windows Vista and Windows 7 it requires 1GHz CPU and 1GB RAM.
-- It has simple, nice and sleek user interface. i.e. very easy to use even for the novice users.
-- It can even disinfect infected files i.e. It can repair the executable (.exe) files infected with virus like 'Mabezat', 'Sality', 'Virut.BN', etc and restore file to its original content, which even the commercial antivirus cannot perform.
-- It detects virus and notifies us as we open, view or access the files.
-- It automatically updates its virus database from Microsoft Update service so as to be protected from newer viruses.
-- Very less false positives. (i mean by antivirus suspicious files are detected as virus which may include even our own files, so with MSE there is less possibility of this)

So, It's time to know
How to get MSE and run on your own computer.
1. Make sure you have genuine copy of Windows and proceed. Open this link from Microsoft to download the antivirus. Choose your version of Operating Systems and download the file. File size is about 8 - 12MB.
2. Double click the downloaded file.
3. Click 'Next', Then 'I Accept' then 'Install'.
4. After installation the antivirus updates from the internet. 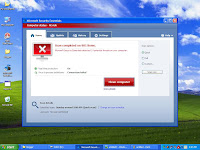 5. You can manually scan your files or folder by right clicking the desired folder/drive/
file and selecting 'Scan with Microsoft Security Essentials'.
6. After scan if a virus is found the antivirus program turns to red and with warning message and a 'Clean computer' option as in the picture.
7. Then click on "Clean Computer" and the virus gets removed. 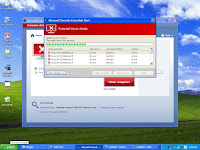 8. The cleaning process displays as follows.

9. MSE automatically detects threats as we access the files so in such case it displays a popup message like in this picture.
I would love to see all my blog visitors get protected from viruses. If you require more details just comment.
To post comments you need to have blogger or gmail ID.
You can visit more of my blogs from the below navigation bar saying 'Must visit pages' and 'Popular' menu.
or by visiting the "USE ME' tab on top.
ODYSSEY OF ENIGMA

http://beyondrakesh.blogspot.com
Beyond the invisible (infinity)
"Knowing others is wisdom, knowing yourself is enlightenment."
Posted by beyondrakesh at 8:57 PM